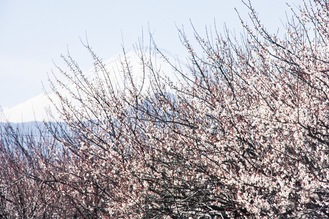 According to the Odawara city government, Soga bairin in Odawara is one of the 3 greatest plum trees in Kanto region in Japan. There are around 35,000 white flowering plum trees set against a beautiful backdrop of Mt. Fuji and Hakone mountain range, a lot of tourist visit Odawara in February and enjoy the scent of plum blossoms.

Plum trees in Odawara have a long history. It is told that before the Houjou clan governed the Odawara area in the civil war era, the end of 15-16th century, many plum trees planted there for food such as a pickled plum.

According to a tourism association, Sogabessyo ume matsuri kanko kyoukai, Odawara used to be developed as a post town for people going over mountains of Hakone, and so many tourists had visited Odawara. Most of them bought pickled plums in Odawara for preservation of their food and for their health. Odawara’s pickled plums were introduced in a old novel, Toukaidouchu hizakurige, as a special souvinir of Odawara. 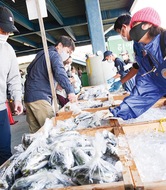