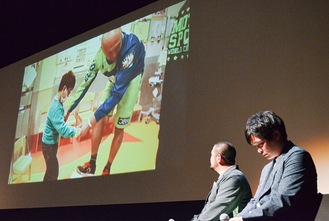 Mr. Kuniaki, on the far right, and Mr. Okumura, the 2nd from the right, watching a video of Mr. Shigetaka.

On April 24th, a memorial event of Shigetaka Ｈisamitsu, who used to be a professional futsal player of Shonan bellmare futsal club and who passed away at age of 39, was held in Minami ashigara city.

His younger brother, Mr. Kuniaki, and a director of the club, Mr.Ｋeito Ｏkumura, talked about their memories of Shigetaka on a stage. The younger brother said that he spent longer time being with his older brother because a cancer was found in Shigetaka's lung. Experiencing his brother's death made Mr. Kuniaki start an action called 'Futsal ribbon' for supporting pediatric cancer patients. One of his biggest motivations for the action is to make 'a chain of smiles' that is what Shigeaki often said.

The director, Mr. Okumura, said that he cannot forget a moment that he was informed of Shigetaka'slung cancer. "My mind went blank at the time", he talked. At the end of his speech, Mr. Okumura sang a song relating to the futsal player who went to heaven.