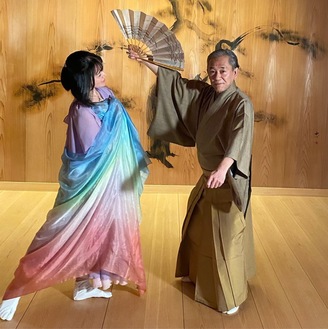 A dancer living in Odawara, Miho Ozaki, 45, who invented a new kind of dance called "Veil dance", has opened her dance class on a Kyogen stage in Kyoto since April 2021.

Kyougen is one of Japanese traditional stage arts. Most Kyogen stories are based on the daily lives of common people and tend to be comedy. For supporting Mrs. Ozaki, a Kyogen performer, Senzaburo Sigeyama, 56, has shared his Kyogen stage with her.

At the end of 2020, Mrs. Ozaki and her friends went to kyoto to watch a Kyogen performance of Mr. Sigeyama that had learned performance from his father and grandfather who have been certified as a living national treasure of Kyogen. While enjoying his play, she was touched by his sophisticated dance and beautiful voice so much. She said, "His performance made me want to improve my dance and show it on this traditional stage". This professional veil dancer tried to ask him to see her dancing.

After he saw her dancing, he found her veil dance so interesting, and decided to start supporting her.

The kyogen performer also began to teach her some unique techniques of Kyogen performance, and she incorporated the Kyogen techniques into her dance.

On April 25th, She finally held her first dance class in Kyoto, and around 10 people including children joined it. One of the participants said "While dancing, I felt comfortable like I was freely flying in the sky! I really want to join it again."

Mrs. Ozaki's dance class is planned to be held once a month in Kyoto.

※This English article is based on a article bellow.