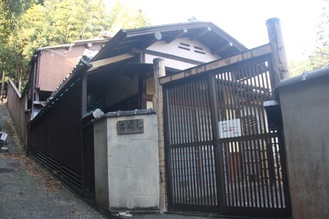 In 1936, young officers from the former army killed and wounded government leaders in the "2.26 Incident. The "Koufuso Preservation Association," which is made up of local volunteers, is struggling to maintain Koufuso in Yugawara Town, a museum that tells the turbulent history of the Showa period (1926-1989) as the only place outside of Tokyo where the incident took place.

The preservation group was established in 2002 by a group of local volunteers. The building had been threatened with destrunction by rain and wind, so the volunteers gathered to preserve it.

They opened Kofuso as a museum of history in 2003.Volunteers guide visitors to the museum on weekends and holidays, and about 3,500 people visited the museum every year before the Corona disaster, and the total number of visitors exceeded 60,000 in 2007.

In 2021, the group held its first crowdfunding campaign, aiming to raise 2.5 million yen from August 30 to November 5. The group received donations from 109 people, but only about 20% of the target amount. The group is now working on a construction plan, saying, "We would like to make use of the donations we received and proceed with repairs as much as we can."

Kofuso which was built as a Japanese inn was raided early in the morning on the day of the February 26 Incident by eight young officers from the Battalion. The target was the former Minister of the Interior, Count Makino Nobuaki, who was staying there with his family to rest. Count Makino was rescued by local firefighters who rushed to his aid, but his escort, a police officer, was killed.

※This English article is based on an article bellow.