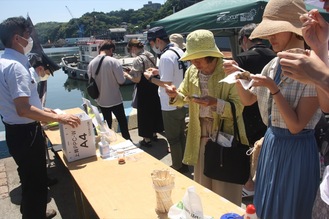 Manazuru town's specialty rock oysters, Kakuhou, have been recently popular. For promoting food industry of Manazuru town, the town government have cooperated with oyster formers and started farming oysters off the coast of Manazuru since 2015. After spending 6 years, the farmers finally succeeded to begin shipping the oysters which are named "Kakuhou", and sold them as a new product of Manazuru town in 2021. According to the farmer, they sold about 10,000 of Kakuhou in total.

For making Kakuhou get more famous and popular, Manazuru town have conducted various public relations activities. On March 2022, the town goverment organized a horse race named after Kakuhou in Kawasaki city, and on April, they worked with Yokohama bank to display public infromation and photos of Kakuhou on the bank's ATM for a month.

Not only the town government, but oyster farmers have taken some actions for promotion. On May, the farmers cooperated with staffs of JR Manazuru station to hold Kakuhou free tasting in Manazuru harbor. Because of public relations posters and pamphlets JR staffs made, so many people visited this event. Even though the farmers prepared 411 oysters for the free tasting, all the oysters run out quickly. One of the farmers got surprised and said, "The number of visiters were so much more than we expected!"

Some seafood restaulants that sell Kakuhou also got plenty of customers on this day because most of the visitors could not get the oyster at the event.

The oyster farmars hope to sell more Kakuhou this year than last year.

※This English article is based on an article bellow.