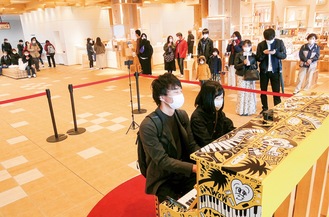 The street piano in Sounzan station

Many people enjoyed beautiful sound of street pianos that placed at Sounzan station of Hakone ropeway and Odawara station.

On 20th March, two 24-year-old people from Chiba played the piano in Sounzan station because they were requested to play a song of a very popular animation, Kimetsu no yaiba, by children. Many audiences seemed to have so much fun!

According to a staff of Hakone ropeway, about 30 pairs enjoyed playing the piano everyday after the piano was placed on 18th March.

In Odawara station, the piano was placed on 22th March. Many people including a pianist group of YouTube creator already tried playing it. For the performance of Yoshikane san, known as YouTube creators who play a piano on their channel, around 50 pedestrians stopped to listen.

A high school student who enjoyed listening the song said, "I have been stressful because of impacts of corona virus, but could have a big fun by their play".